Lighterra is the software company of Jason Robert Carey Patterson. The name comes from the words light and terra (meaning Earth), and the Lighterra logo is a translucent globe of the Earth encircled by a grid of light beams.

Under the Lighterra name, I've worked on a surprisingly wide range of software, from the very lowest, most technical and "nitty-gritty" levels in the system, as close to the metal as you can get, right up to the highest levels, up in "web land", as far away from the hardware as you can imagine. My work includes the VGO cutting-edge code optimizer (the world's best optimizer, makes programs faster), the Threads++ threading library (allows use of multiple processors/cores), and various other low-level libraries (timers, strings, memory allocation etc). It's not all low-level system software though, there's also been stockmarket charting software, iPhone apps like a graphical speed dialer, and the EmbedVideo web video component.

In addition to software, I've also published a number of articles and technical papers you might like to read, including a couple of very popular ones: Modern Microprocessors – A 90-Minute Guide! and The History of Computers During My Lifetime. The number of readers of those two articles is huge – they'd both officially qualify as "best sellers" if they were physical books.

All in all, you may not have heard of Lighterra, but you probably benefit from my work every day without knowing it! 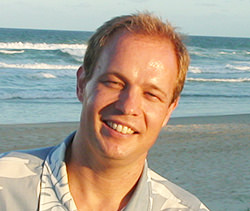 Lighterra was founded on five key principles enshrined in its company constitution...

Be Original, Don't Copy
Today we live in a world of copying, especially in the field of computing. Many successful software packages today are really just shameless copies of earlier products by other companies, where their success has been achieved primarily through marketing, bundling or other similar means. I believe that's wrong. It's unfair to the original inventors and risks killing the incentive to innovate in the first place.
Be Ethical, Do The Right Thing
Much of the modern business world operates at the very edge of what's legal, let alone what's ethical behavior. Today, many major companies in the computing industry routinely cross the line of what's "right", abusing their product's size or position in the market via "dirty tactics" such as bundling, silently changing user settings or file associations, using closed, undocumented file formats to force lock-in on end users, excluding or refusing to interoperate with competing products, using might to influence the pricing suppliers charge to competitors and so on, all in the name of corporate interest, market positioning, "the reality of business" etc. I believe that's wrong, and it's clearly harmful to end users.
Be Reliable, Don't Release Buggy Software
A lot of modern software is released at a very poor, barely adequate level of reliability. End users are routinely expected to tolerate bugs, crashes and incorrect behavior from released, commercially purchased software. This is something which would not be tolerated in other engineering industries such as aviation, automobiles or household appliances. I believe that's unacceptable. Released software should be just as reliable as released cars, planes or dishwashers, and end users should be able to trust it to be that way. Software should not be released until, and unless, it reaches that level of reliability. I even back up this belief with a warranty for commercial software, something almost unheard of in the computing industry.
Be Efficient, Performance Matters
Today, nothing is as valuable as people's time, yet a lot of modern software is bloated and grossly inefficient, wasting countless millions of man-hours worldwide. Many successful modern software packages use an order of magnitude more memory than they really should, and are so inefficiently written that they make even blazingly fast modern computers feel slow. I believe that's a terrible waste of human time, on a worldwide scale.
Be International-Friendly, Treat All Customers Equally
Being a non-American in the America-centric computing industry means products often cost more and become available to you later than they should. In many cases you can't even buy directly from the manufacturer, and must buy through a local reseller at an additional cost. Foreign customers are treated as second class citizens. That's wrong, and there's no justifiable reason for it. Pricing, product availability and ease of doing business should be equal for everyone, especially in computing where the nature of the technology makes it easy to do so.

Please feel free to contact Lighterra at any time. The contact information page lists the relevant addresses and other details.

You can find out more about Lighterra's legal status and registration details on the legal information page, along with Lighterra's privacy policy, software licenses and trademarks. A warning though – legal stuff is boring (you already knew that, right?).